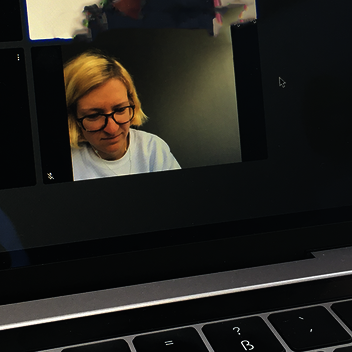 In her work, Stefanie Rau moves between the areas of conceptual graphic design, text-based artistic practice and teaching. She first studied visual communication at the University of the Arts in Berlin, where she worked as a tutor at the Chair of Media Theory. She received her Master's degree at the Critical Studies Department of the Sandberg Institute in Amsterdam, where she developed an artistic writing practice articulated through lecture performances, essay films or installations.

Her texts have been presented at exhibitions or conferences in Amsterdam, London, Athens, Stuttgart, Riga, and Berlin. She works in irregular regularity for the queer-feminist Missy Magazine and co-founded the studio operative.space, with which she collaborates for institutions such as the ZKM Center for Art and Media Karlsruhe, the ArtLab at the EPFL Lausanne or the Academy of Media Arts Cologne. After some self-organized educational projects, she has been a lecturer in the foundations at the weißensee art academy berlin since the beginning of 2019.