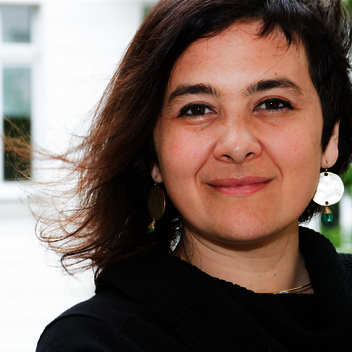 Juana Awad is a Colombian-Canadian artist and curator based in Berlin. She studied Semiotics/Communication Theory (University of Toronto, CA), Drama/Theatre Studies (University of Toronto, CA), Fine Art Media (Slade School of Fine Art London, UK) and Cultures of the Curatorial (Hochschule für Grafik und Buchkunst Leipzig, DE).
Her principal interests lie at the intersections of knowledge and artistic practices, the effects of institutional processes on the production and reception of art, and the political potential of arts and culture presenting. Throughout her carrier she has been invested in opening spaces for underrepresented artists and communities actively advocating for and implementing parity, equity and diversification.
She has been a jury for various film festivals and funding instances, including the interdisciplinary production fund IMPACT from the Berlin Senate for Culture and Europe (DE) or the media art production and operational funding schemes from the Canada Council for the Arts and the Ontario Arts Council (CA).
Her video work has been shown internationally at festivals and galleries including Rencontres Internationales (Berlin, Paris, Madrid / EU), Gallery 27 (London / UK), MIX21 (New York / US), Maison de la Culture (Montréal/ CA), Rio Curta Cinema (Rio de Janeiro / BR) and Sanhe Museum (Sanhe / CN), amongst others.
She has led independent festivals for example AluCine Latin@ Film Festival Toronto (CA) or the Karneval der Kulturen in Berlin (DE) (updating its rhetoric and investigating the complications with the “traditional/contemporary” divide,) and has curated screenings and exhibitions internationally, including for the Toronto International Film Festival (CA), Planet in Focus Environmental Film Festival, the Goethe Institut-Max Müller Bhavan Mumbai (IN), the MAMBO Museum of Modern Art Bogotá (CO), amongst others.
Awad has also been responsible for the implementation of large research-arts projects including 3DFLIC - 3D Film Innovation Consortium at York University (CA), and most recently the DFG funded research group “Knowledge in the Arts” at the Berlin University of the Arts (DE).