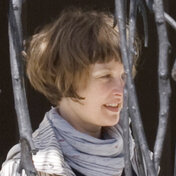 Ulrike Mohr’s artistic approach utilizes material transformation processes that are influenced not only by complex research and entrusted knowledge, but also by chance occurrences. Over the past years, the burning of char has become a central modus operandi in her work. Mohr’s large “spatial drawings” are characterized by an attention to detail and surface: Subtle textures of everyday objects are as important to her as the attempt to uncover relationships between aesthetics and science – present and past.

Ulrike Mohr was born in Germany (1970), lives and works in Berlin, Germany.
She studied Fine Art / Sculpture at Weißensee Academy of Art Berlin with an exchange at the Academy of Fine Art Trondheim, Norway. In 2004, following one year of "Master-Class-Studies", she received the academic title "Meisterschülerin".
She exhibits frequently in international solo and group shows and realized diverse public art-in-architecture projects. Mohr was recipient of the Elsa-Neumann-Stipendium from the State of Berlin, the Mart Stam Prize and numerous grants such as the Istanbul Grant of the Berlin Senate and Stiftung Kunstfonds.