The weißensee academy of art berlin was founded in 1946, during a difficult and turbulent phase of Germany’s rebuilding, by artists with affiliations to the Bauhaus. Two of the first rectors were the Dutch designer and architect Mart Stam (1899–1986) and the ceramicist Jan Bontjes van Beek (1899–1962). The Academy, then known as the “Art School of the North” was provisionally housed in the former Trumpf chocolate factory. Professor Selman Selmanagic, the Bauhaus architect and director of the School’s architecture department, enlarged it in the 1950s, when it became the East Berlin Academy of Art. The entire architectural ensemble is now under landmark protection.

After German reunification, parts of the Campus were modernized and several new buildings were added. Two buildings for the departments of painting and sculpture opened their doors in 2011. The auditorium Selmanagic built in 1956 was restored thanks to funding from the Wüstenrot Foundation monuments program; it reopened in 2012. Currently 850 students benefit from the excellent educational facilities in Berlin Weissensee. 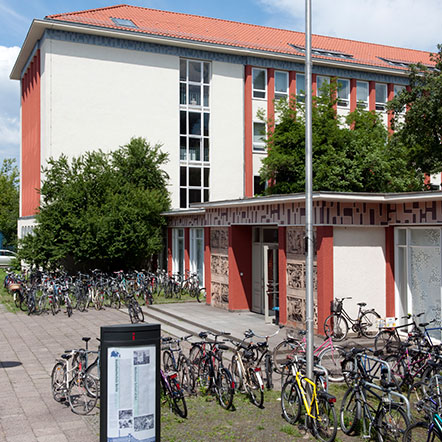