The dining hall of weißensee academy of art is run by studierendenWERK Berlin.

Opening hours:
Monday to Friday: 8 am to 3 pm

During semester breaks, there are different opening hours; in the summer, the dining hall is closed for several weeks.

In 2013/2014, weißensee academy of art berlin’s dining hall, first opened on November 11, 1956, was renovated and newly furnished, with joint funding by the academy and the studierendenWERK Berlin. It is now used both for eating and studying, as well as for leisure activities, Currently, it has 115 seats on an area of 235 square meters.

The space had five parts

The ensemble of which the dining hall is part, is listed as a historic building.

The sgraffito muralTiere, created in 1956, in the dining hall space was painted over in the 1970s. During the latest renovations, the academy’s academic senate decided to have it partly uncovered again.

The path from Bühringstraße to the dining hall is wheelchair accessible. 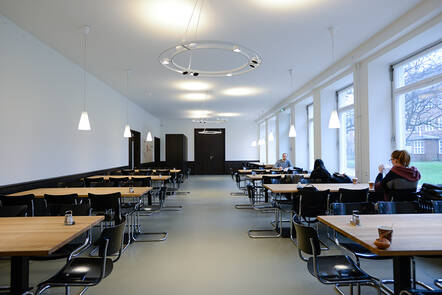