Lava flows are streams of molten rock that pour from an erupting vent. Lava is erupted during either nonexplosive activity or explosive lava fountains. Lava flows destroy everything in their path, but mostly it moves slowly enough, that people can move out of the way. The speed at which lava moves across the ground depends on several factors, including the type of lava erupted and its viscosity; the steepness of the ground over which it travels; whether the lava flows as a broad sheet, through a confined channel, or down a lava tube. It is crucial to define the three stages of lava: first is the liquid, boiling hot molten rock, then it turns into Magma the minute it erupts, at last when cooled it is known as Basalt rock.

Everything in the path of an advancing lava flow will be knocked over, surrounded, or buried by lava. Methane gas, produced as lava buries vegetation, can migrate in subsurface voids and explode when heated. Thick viscous lava flows, especially those that build a dome, can collapse to form fast-moving flows. It cools very quickly at first and forms a thin crust that insulates the interior of the flow. As a result, basaltic lava flows can form crusts that are thick enough to walk on in 10-15 minutes but the flow itself can take several months to cool. Due to the insulating properties of lava, it cools slower and slower over time. Thick stacks of lava flows (30m thick) can take years to cool completely.

inspired by this process, the aim of the project is to understand the order in the texture and structure of the movement. It is unpredictable, unleashed and unrestrained, in a way it resembles the power of destruction but at the same time something new is being created. It is a great force that can not be controlled as well as the inevitable circle of nature can not be dominate.

What is forever demolished?

How will it change?

What will stay after?

What will it create?

As a path of work, a multi-layer concept was being set as a guideline and a starting point. The choice of a simple dress as a canvas for this process arise from the comparison of the human body to the universe. Choosing the same dress pattern to illustrate the three different stages emphasize the variety of destruction (and creation) every phase has. Re-staging the forces in an esthetic context, connecting it with the body is incorporated the uncontrollable force that melt it. It can not fit to our esthetics character and in a way it is forcing itself to the form of basic clothing. This is a direct translation to our relation with the nature.

In order to understand the order in this chaos, 3 different phases were established-

Magma - in Nature could reach up to a temperature of 1,600 Celsius. it is wet, hot, sleek and shiny looking: represented as latex.

Lava flow – ropey appearance. It is half dry and half wet: represented as fine embroidery cotton thread on tulle fabric.

Basalt – hard molten rock, solid, wrinkle surface that swallows everything underneath and create a totally new surface. It is pretending to be something else as it mimics the surface beneath: represented as a pluster print on hand dyed cotton fabric.

Each phase has its own qualities and properties.

Fascinated by this fast change between liquid and solid materiality the work has begun... 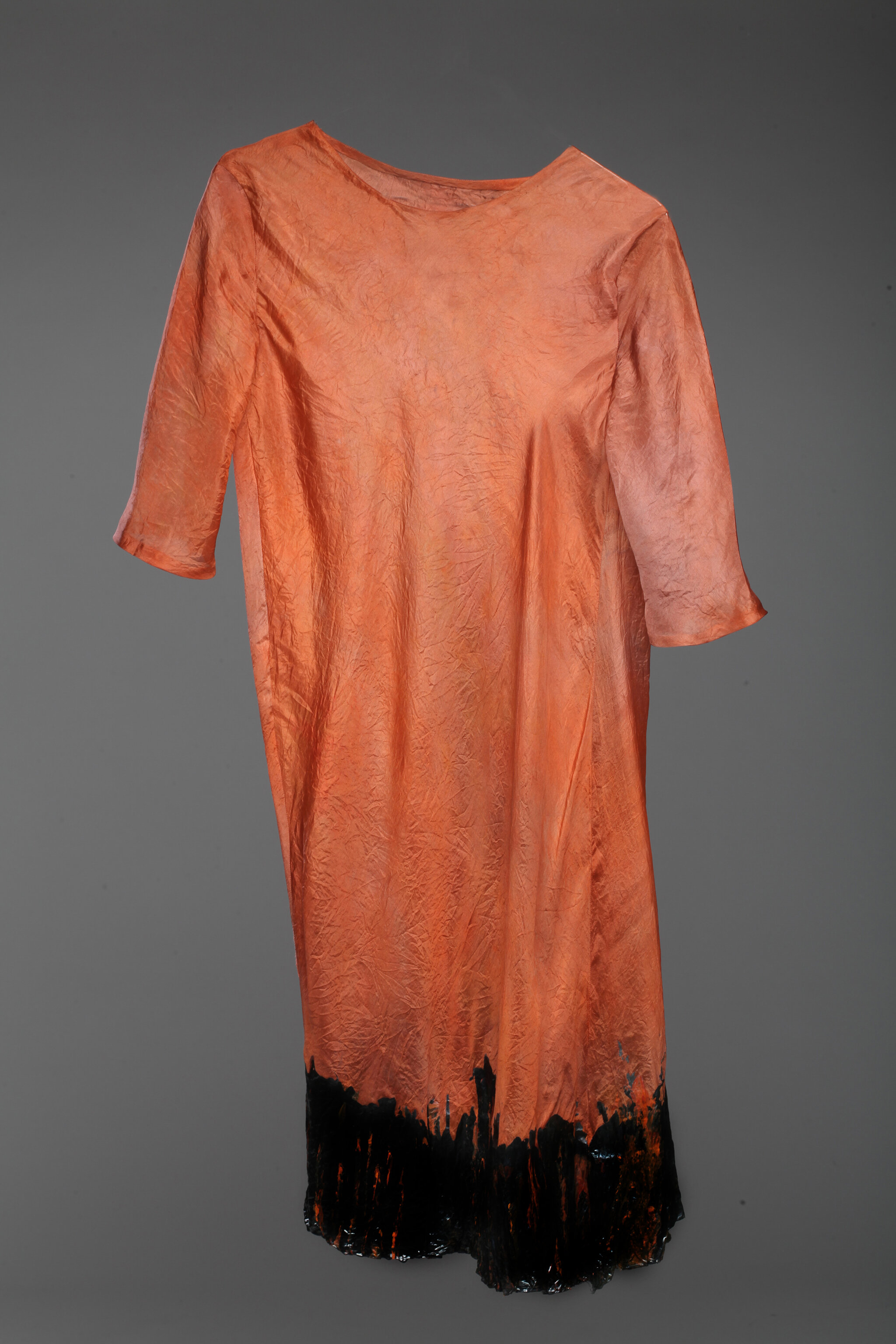 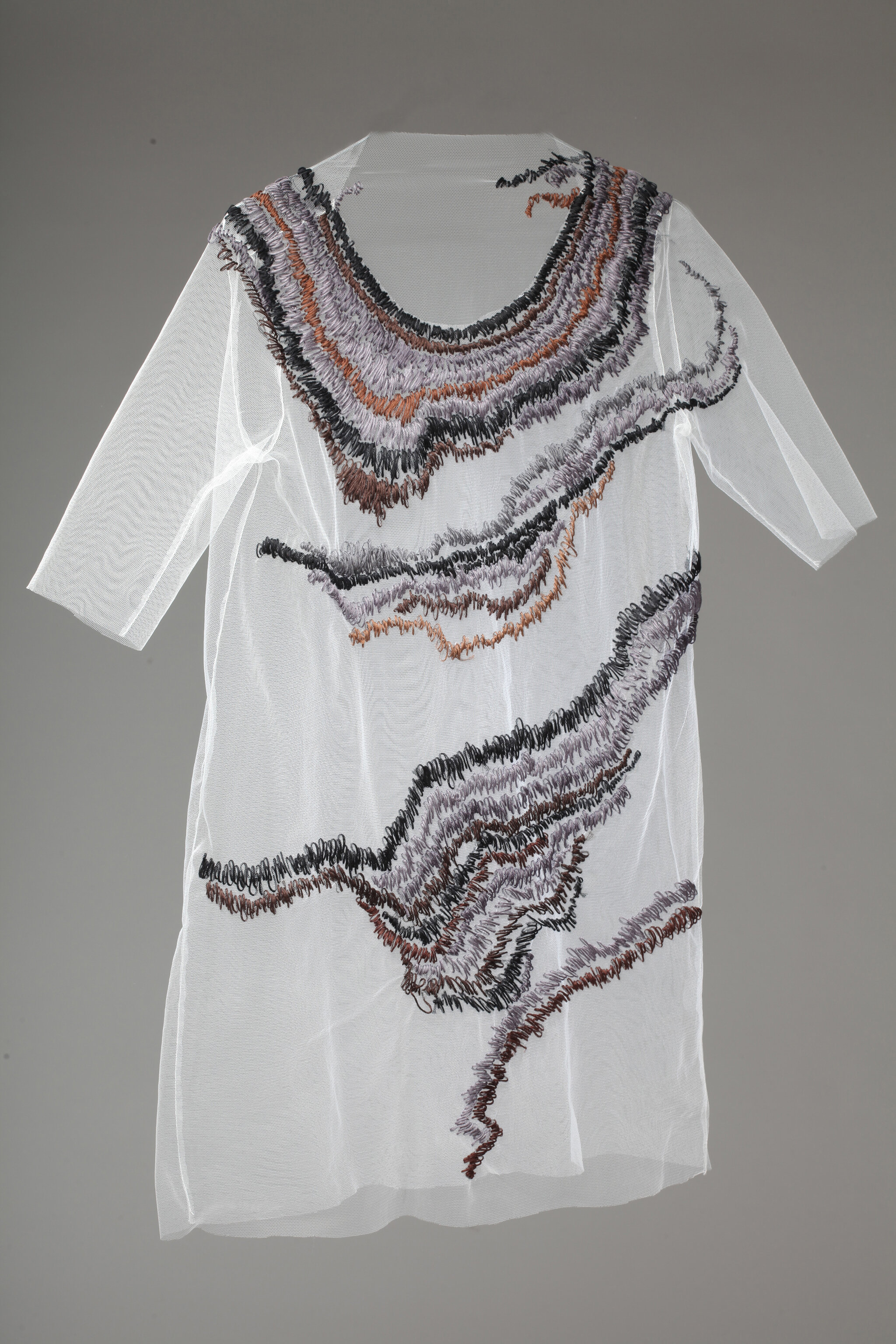 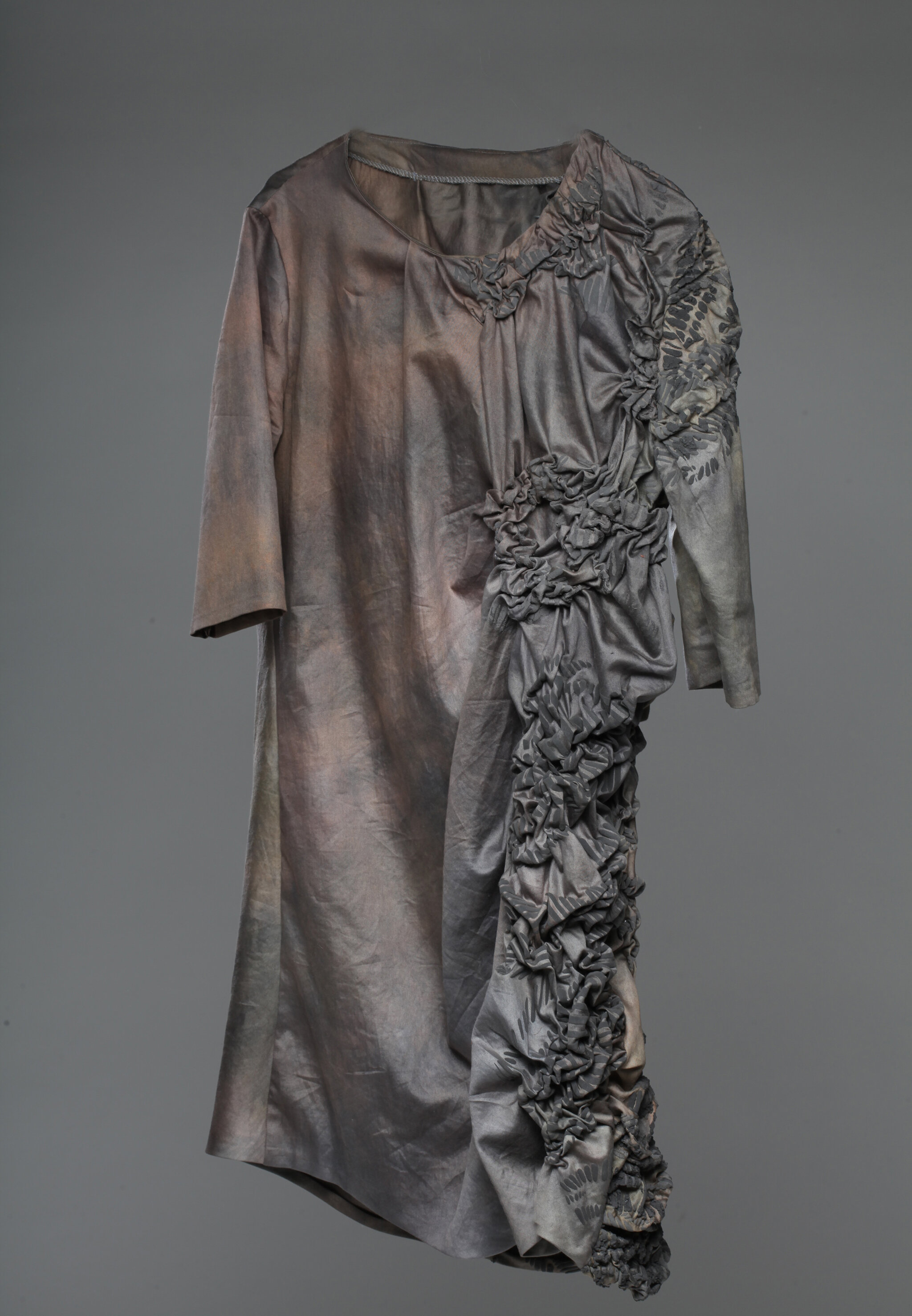 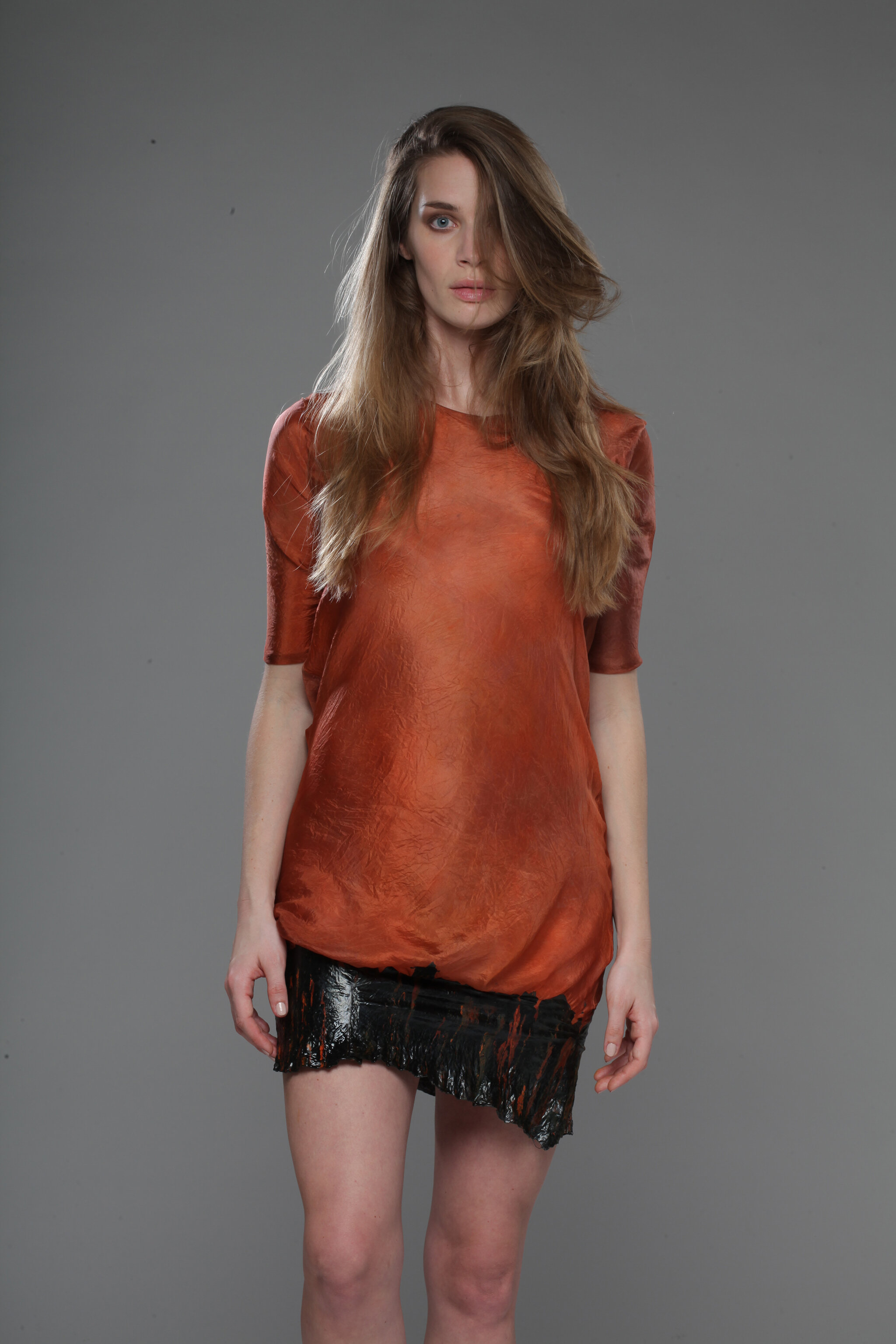 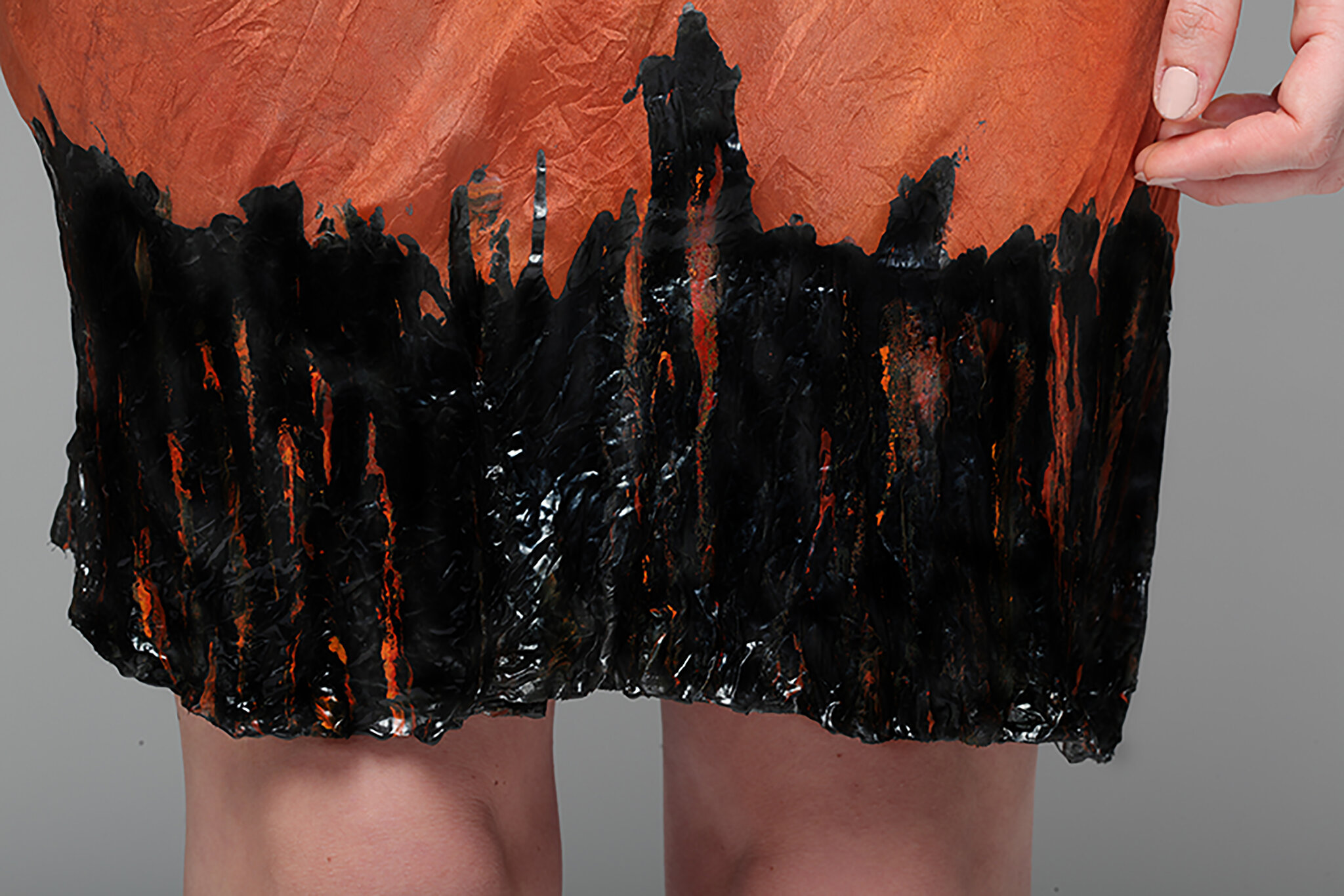 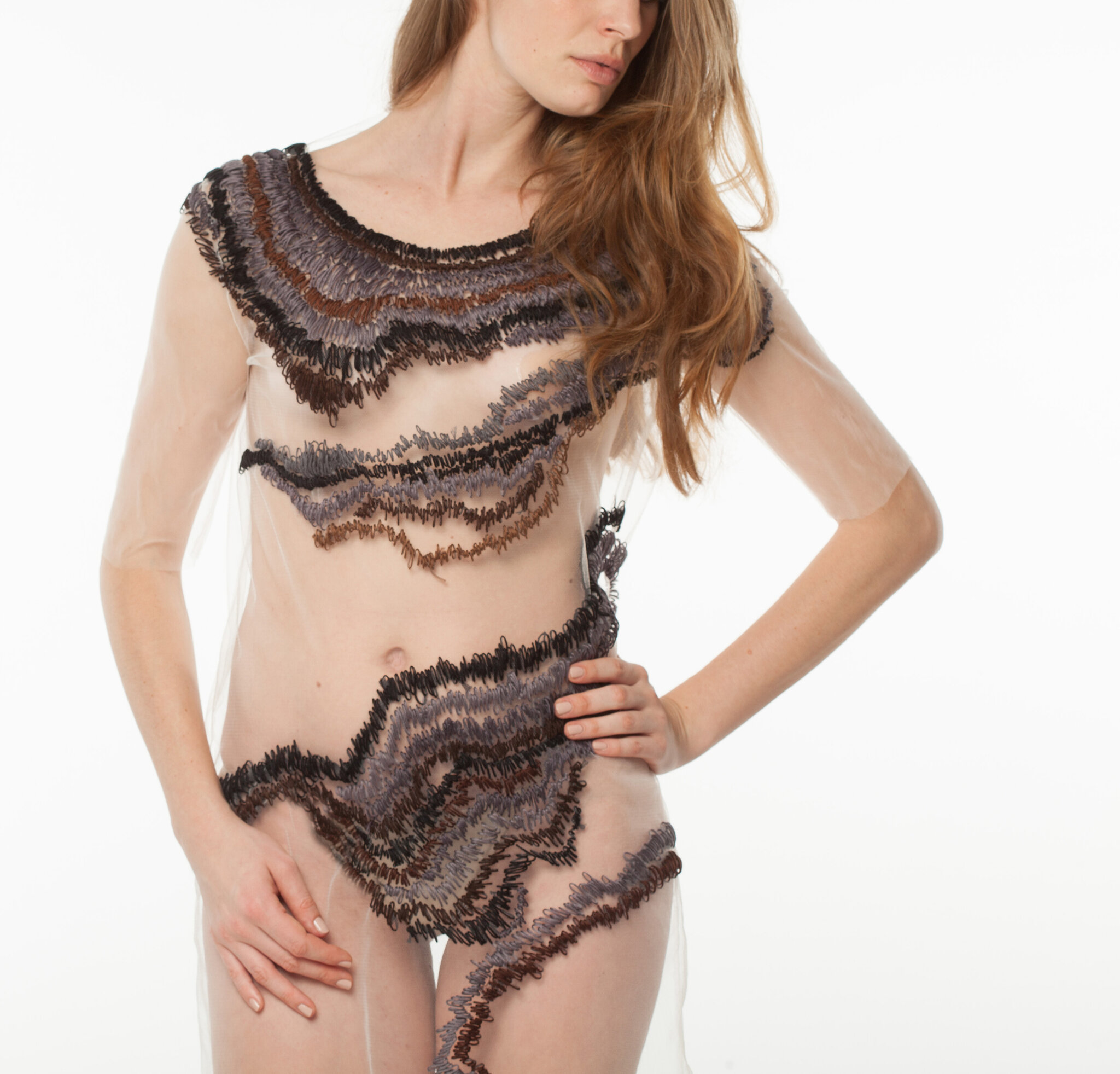 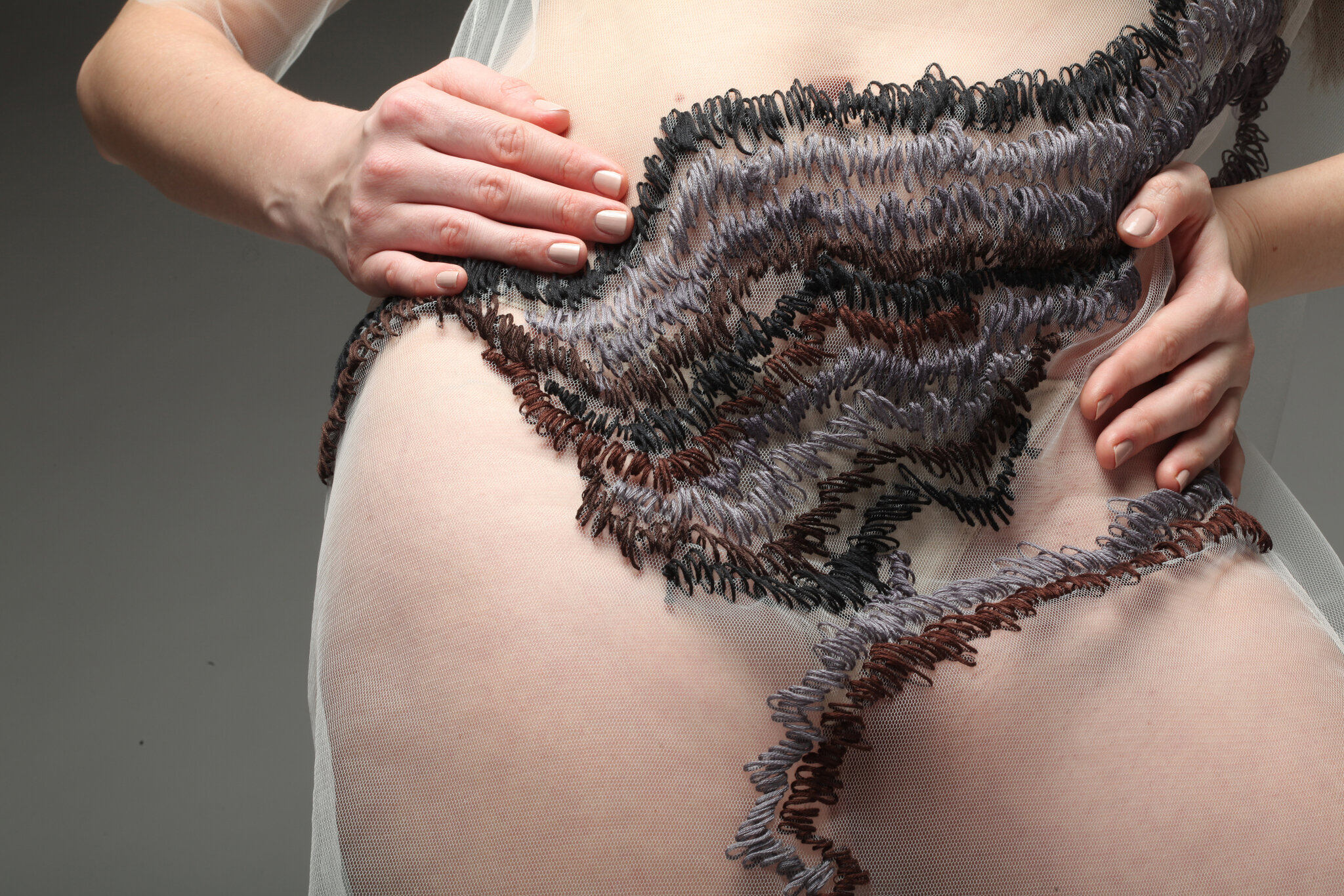 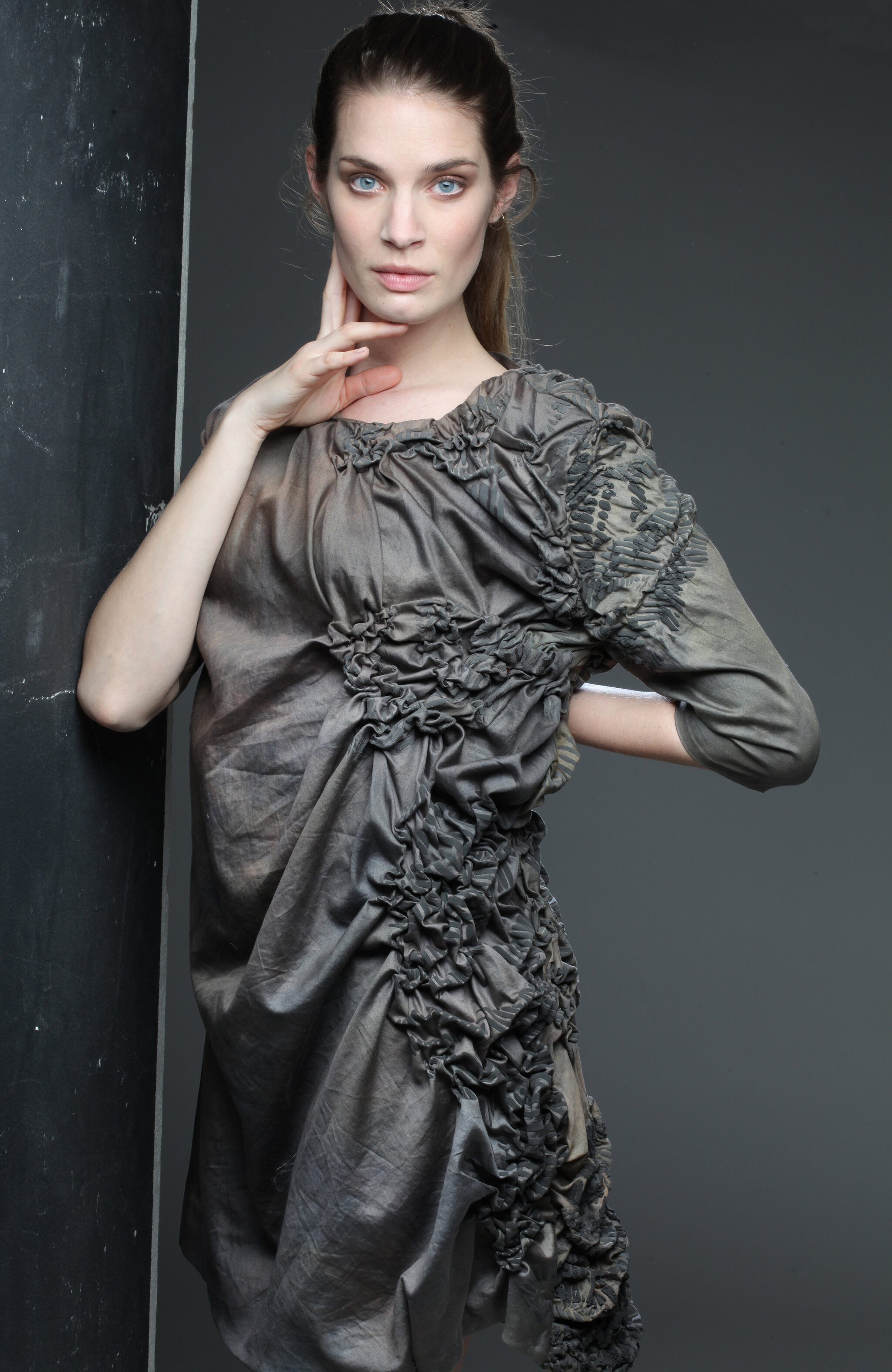 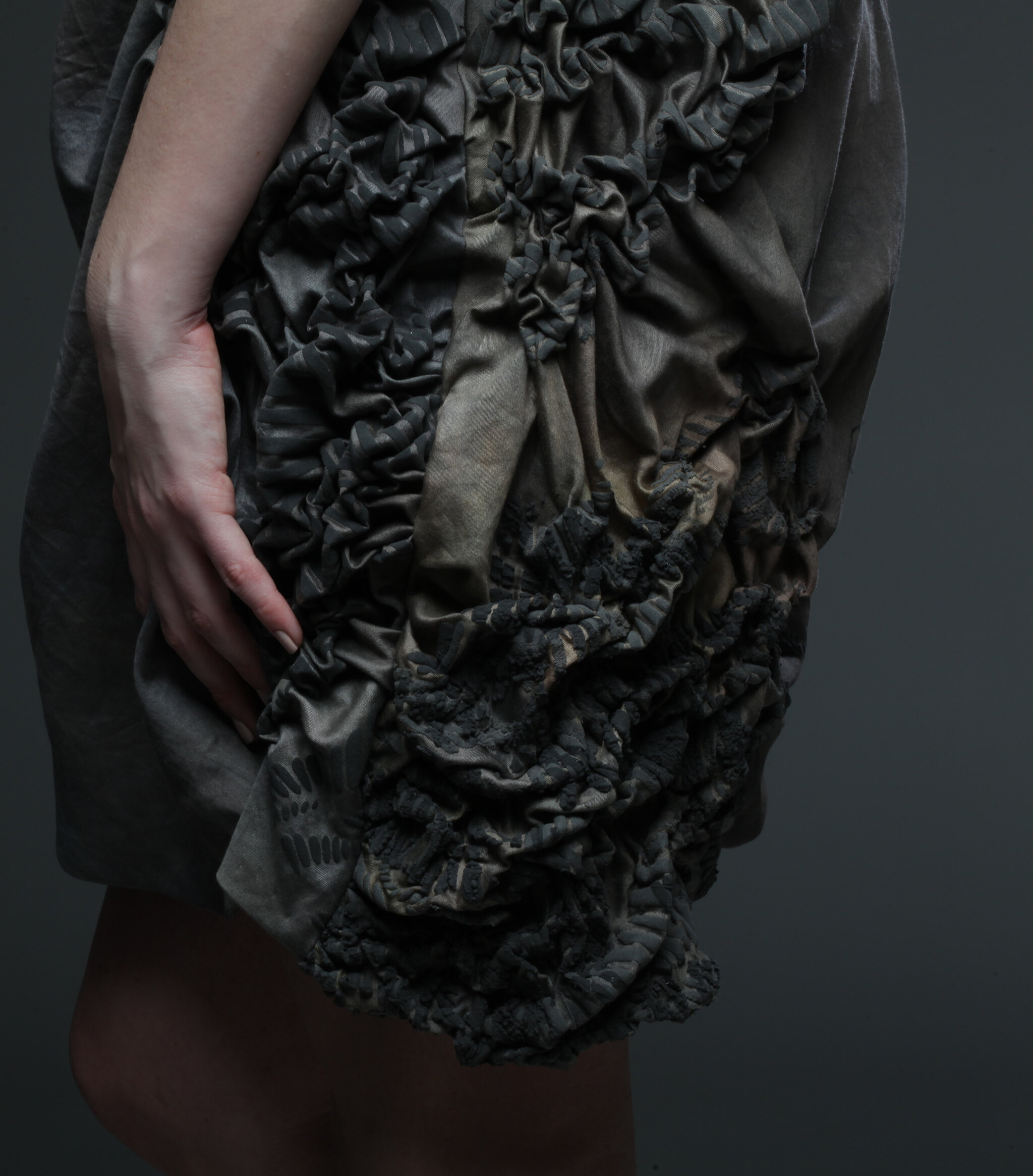 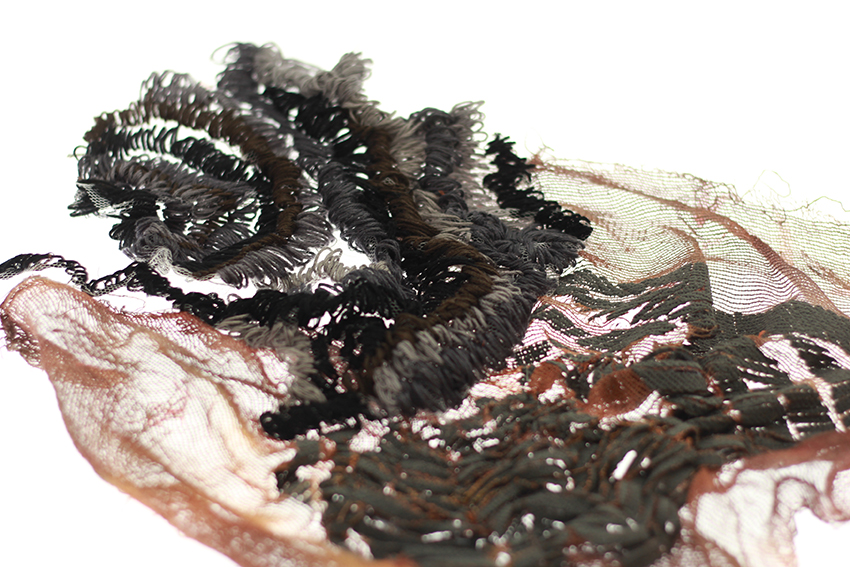 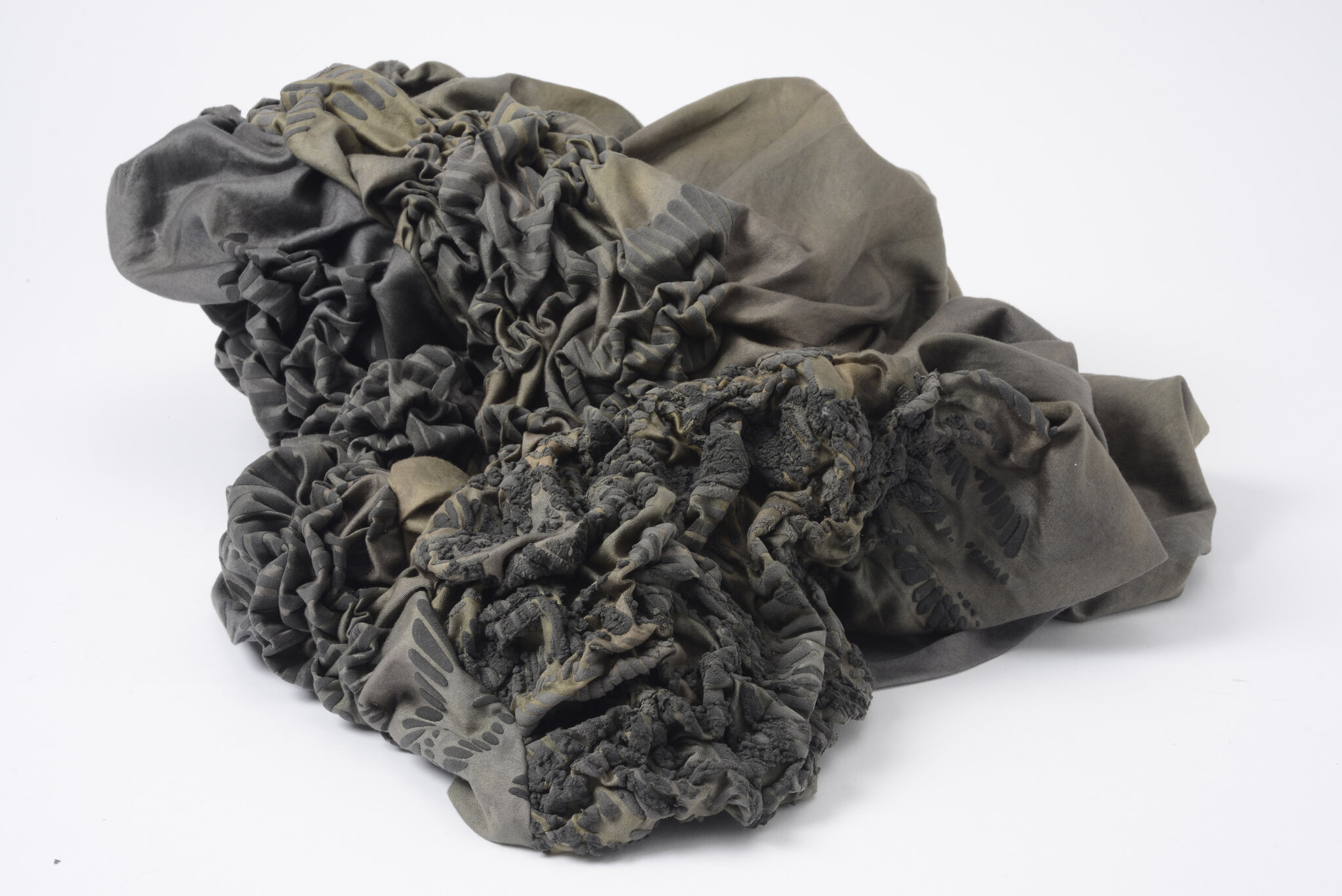 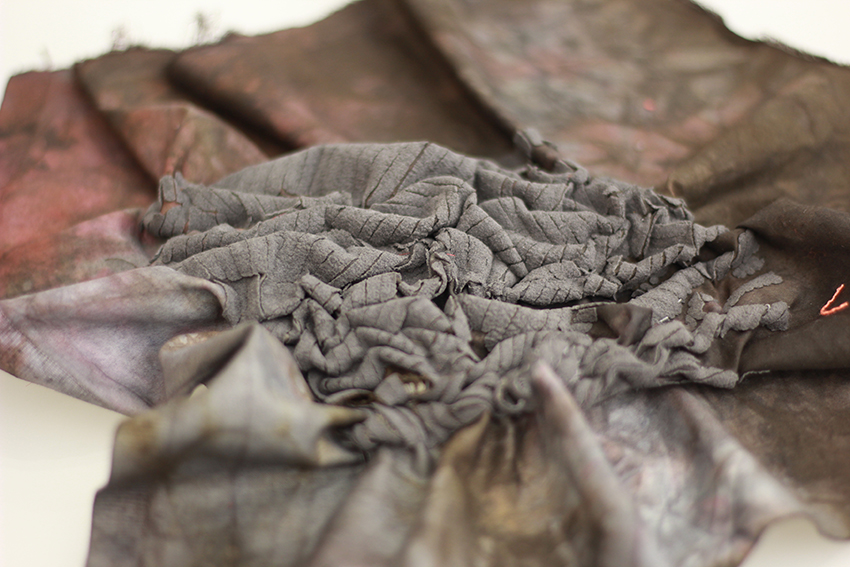