From Skin to Bone

The mechanics of feathers

This project was inspired by the interlocking mechanism of feather systems. Its aim was to create a series of surfaces based on the biomechanics of plumages, thereby avoiding the use of prefabricated textile and synthetic materials. To understand the qualities feathers provide to Birds such as thermic insulation, impermeability to water and specially flying, it is important to conceive them individually as well as within a whole complex system interlocked to the birds skeleton.

Each individual feather is formed in tiny follicles under the skin and is there attached to muscles and supply veins for them to grow strong. Once mature, they are very detailed appendages (see attachment About feathers), which combine several functional elements. Looking at the flight feathers, their central shaft is divided into a thicker section (“calamus”) connected with bones and muscles and a thinner section (“rachis”) carrying on both sides a series of connected branches (“barbs”) which again are branched in so called “barbules”. These barbules contain little hooks which interconnect and ultimately provide for the stability and elasticity of the feather. This function resembles the Velcro effect and is crucial for the plumage in general, which, as a grouping of feathers, is a very complex and heavy integumentary structure. It often weighs 2-3 times the bird’s weight, as bird bones are mostly hallowed, and forms a very strong interconnected system that gives enough stability for the bird to fly.

The surface created for the project BIOMIMESIS is made out by layering two possible materials: coloured/textured paper and thin transparent silicon sheets, or the mix of both. A geometrical pattern was laser cut into each layer creating a grid of openings, which are then folded into the next layer.

Throughout the process different configurations were found, but the tones of paper kept the organic blue and green from birds, parrots and nature in general. Combined with silicon and grey, this palette is thought to be soothing, using unsaturated shades. The result is a catalogue of material named Kramatex: from the words Krama (stages) and texture. A dummy for a conceptual project called Kramatex Prosthetics was developed in Parallel.

Kramatex Prosthetics plays with the hypothetic possibility of humans growing feathers. The documentation explores how evolving feathers in human skin could look like from the author’s humble and naïf artistic point of view. Human anatomy references and cultural anthropology interests inspired it. Kramatex pieces try to describe this growing process and explore the possible areas where this could start.

Emphasis was given to the vertebral bone structure and shoulder blades. In the authors conceptual vocabulary bones ground and feathers allow elevation. They are a last trace in the material world.

Feathers are a symbol of transformation. Birds are the only vertebrate species that has this sort of “bone extension structure” which allows them to defy earth’s gravity and elevate from the flat dimension we modestly inhabit. When we tend to think of bone structures as stiff and rigid, the phenomenon of feathers might change the perception of our limited experience. 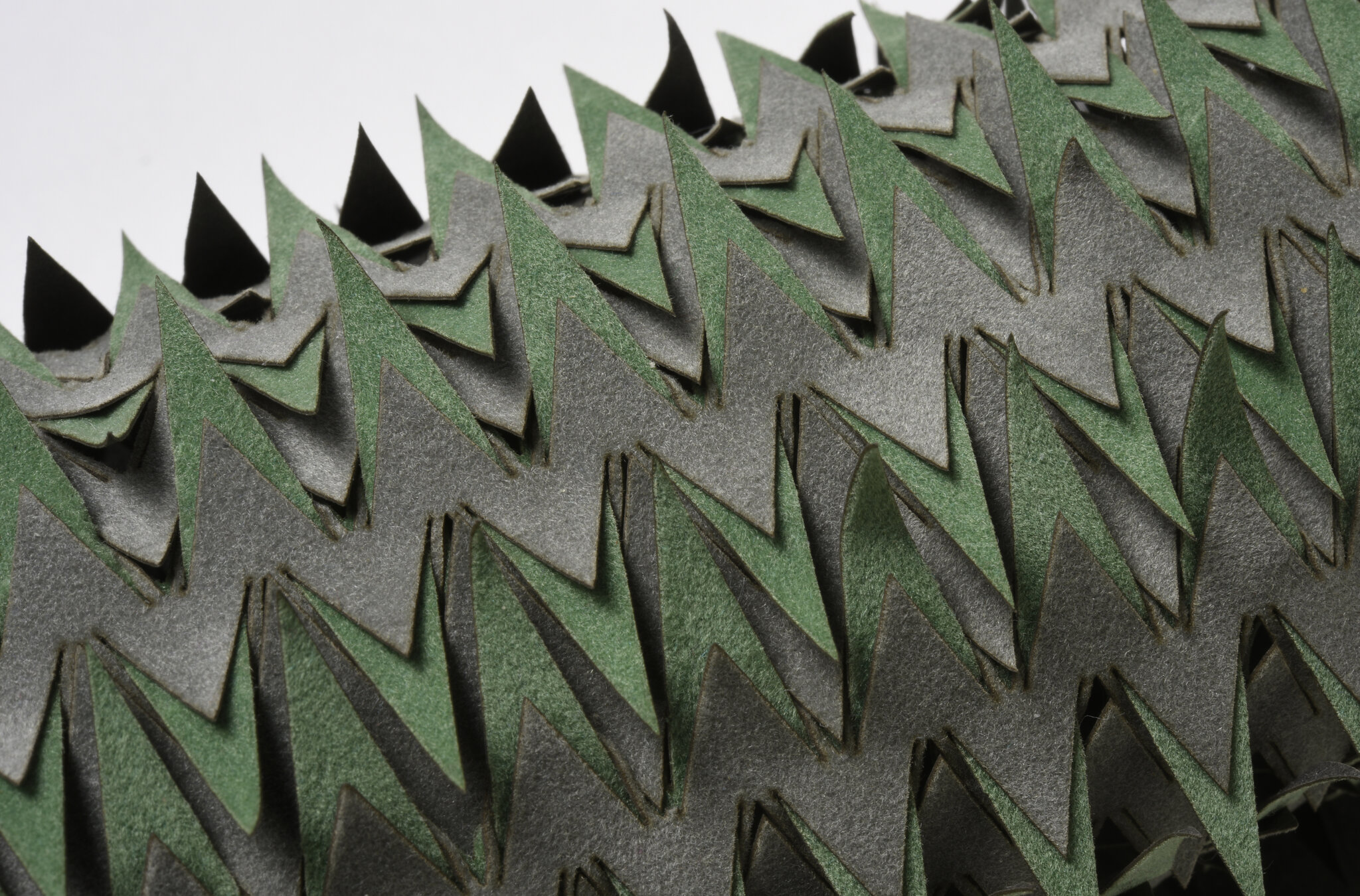 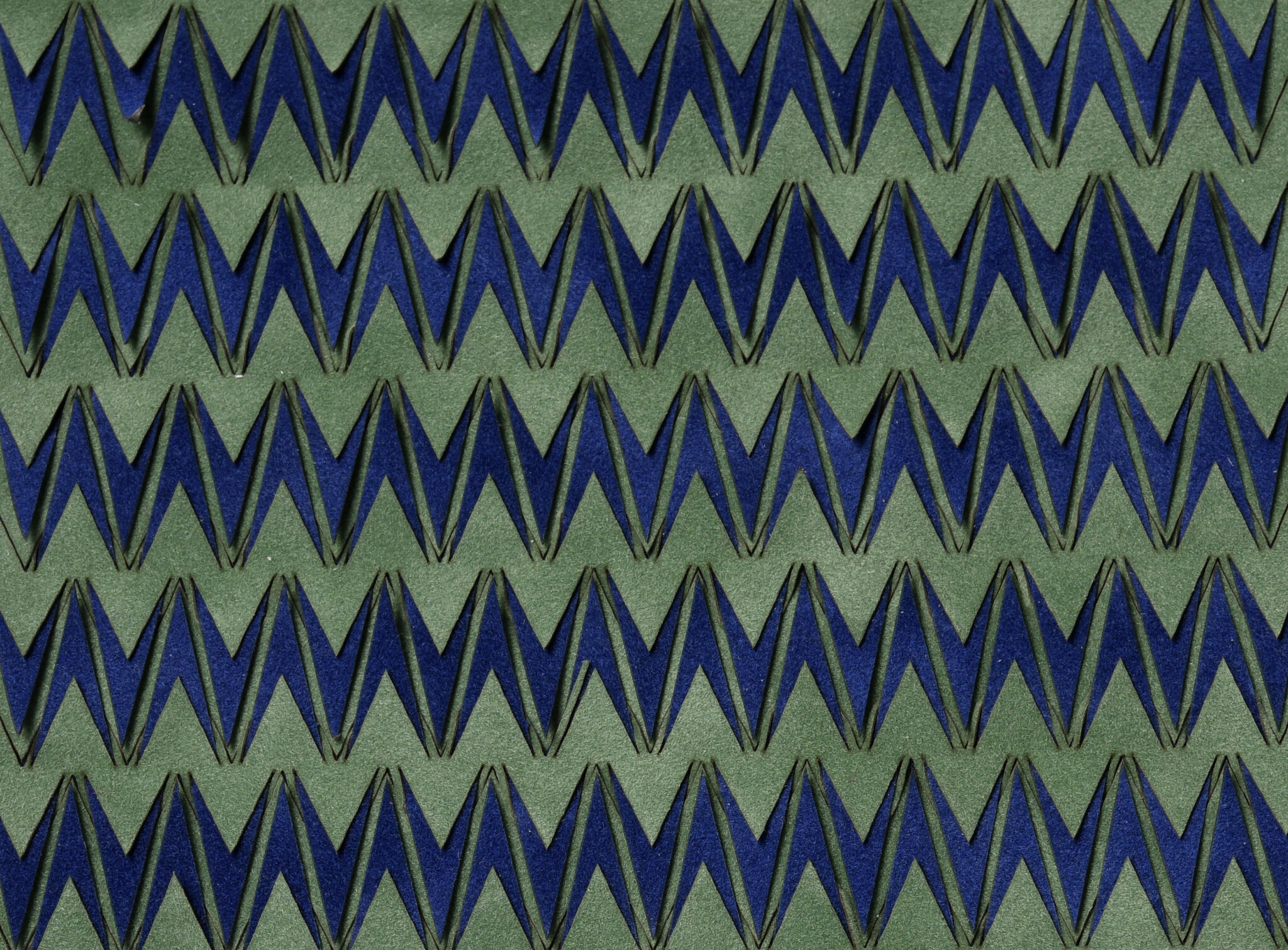 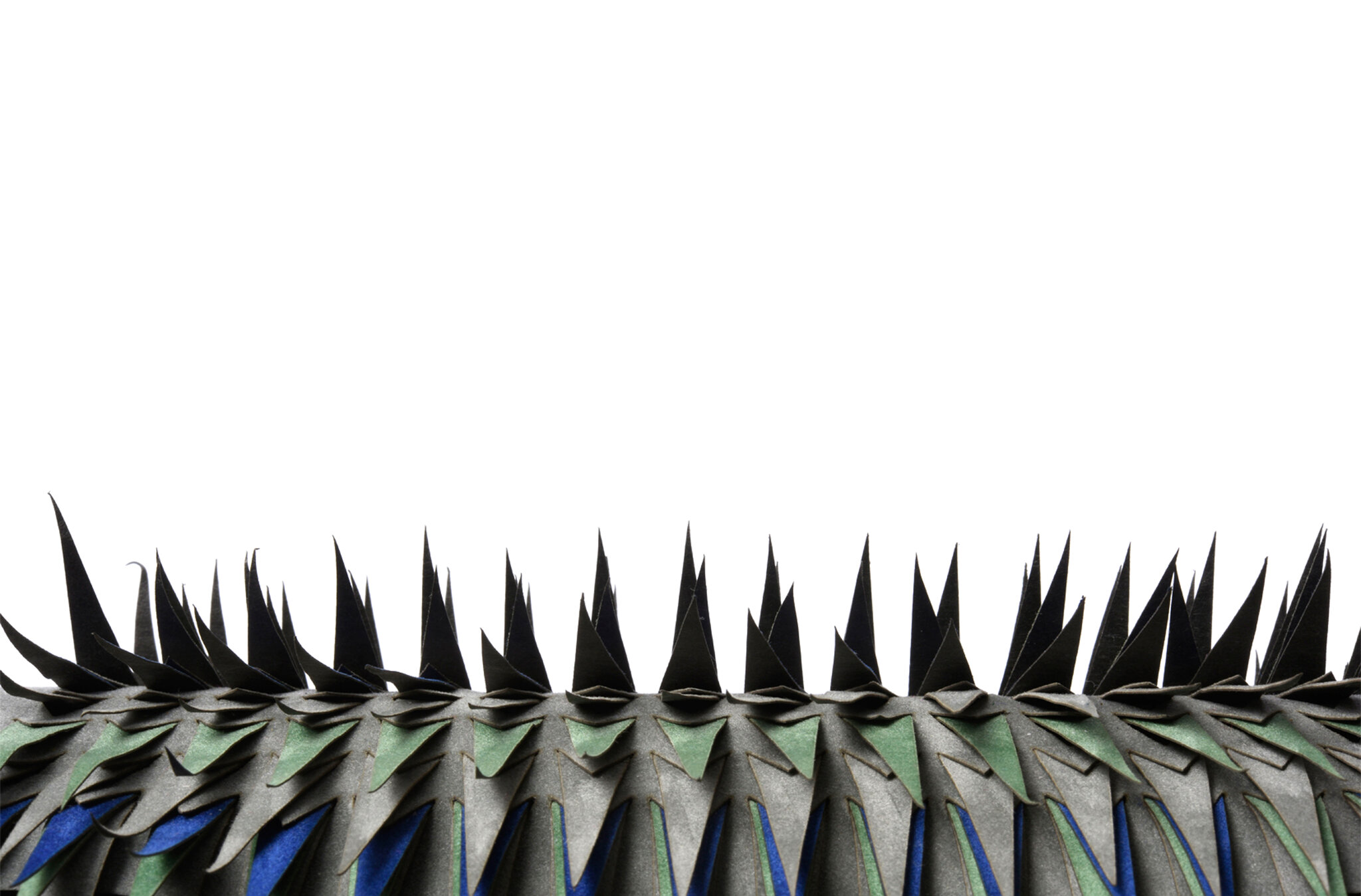 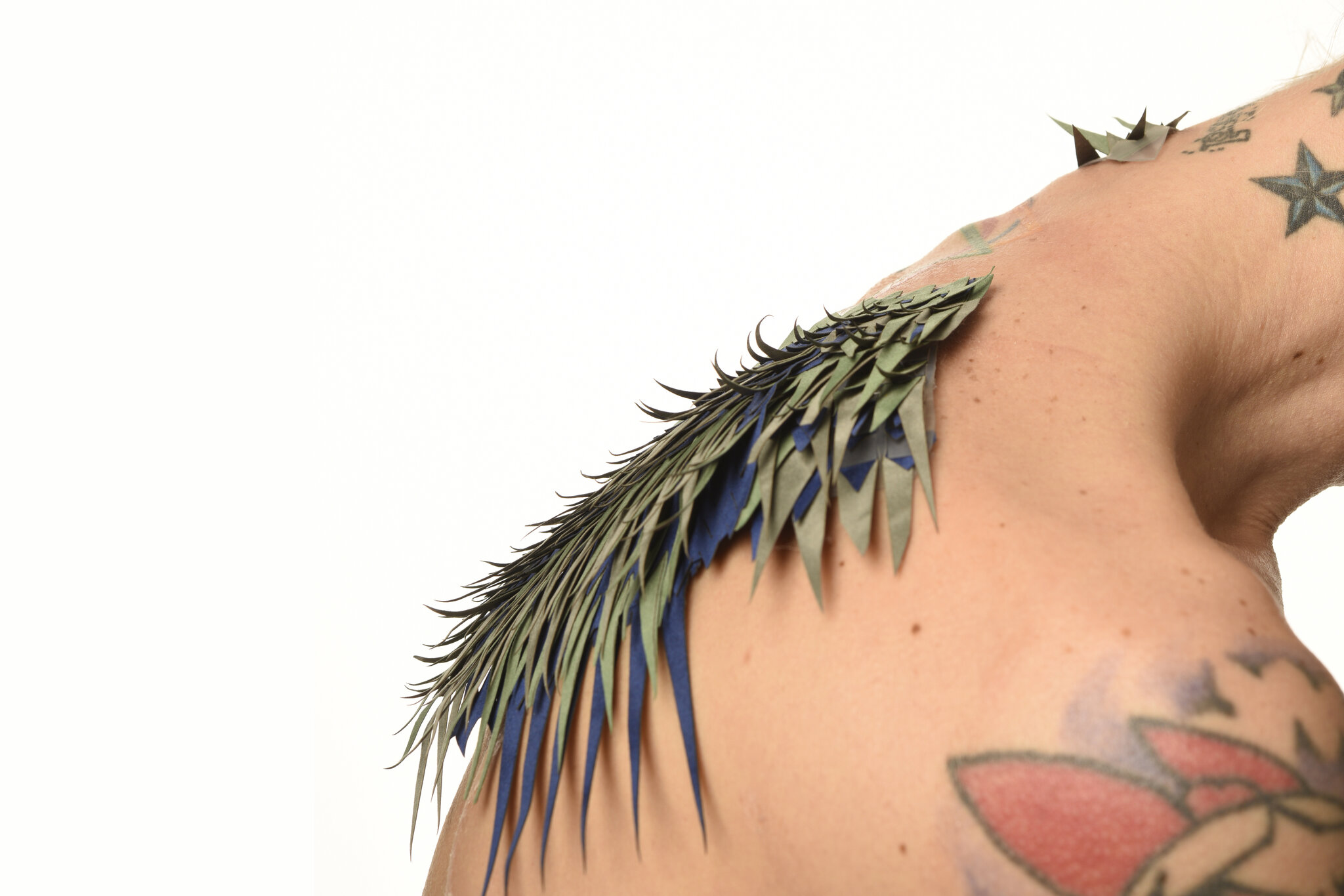 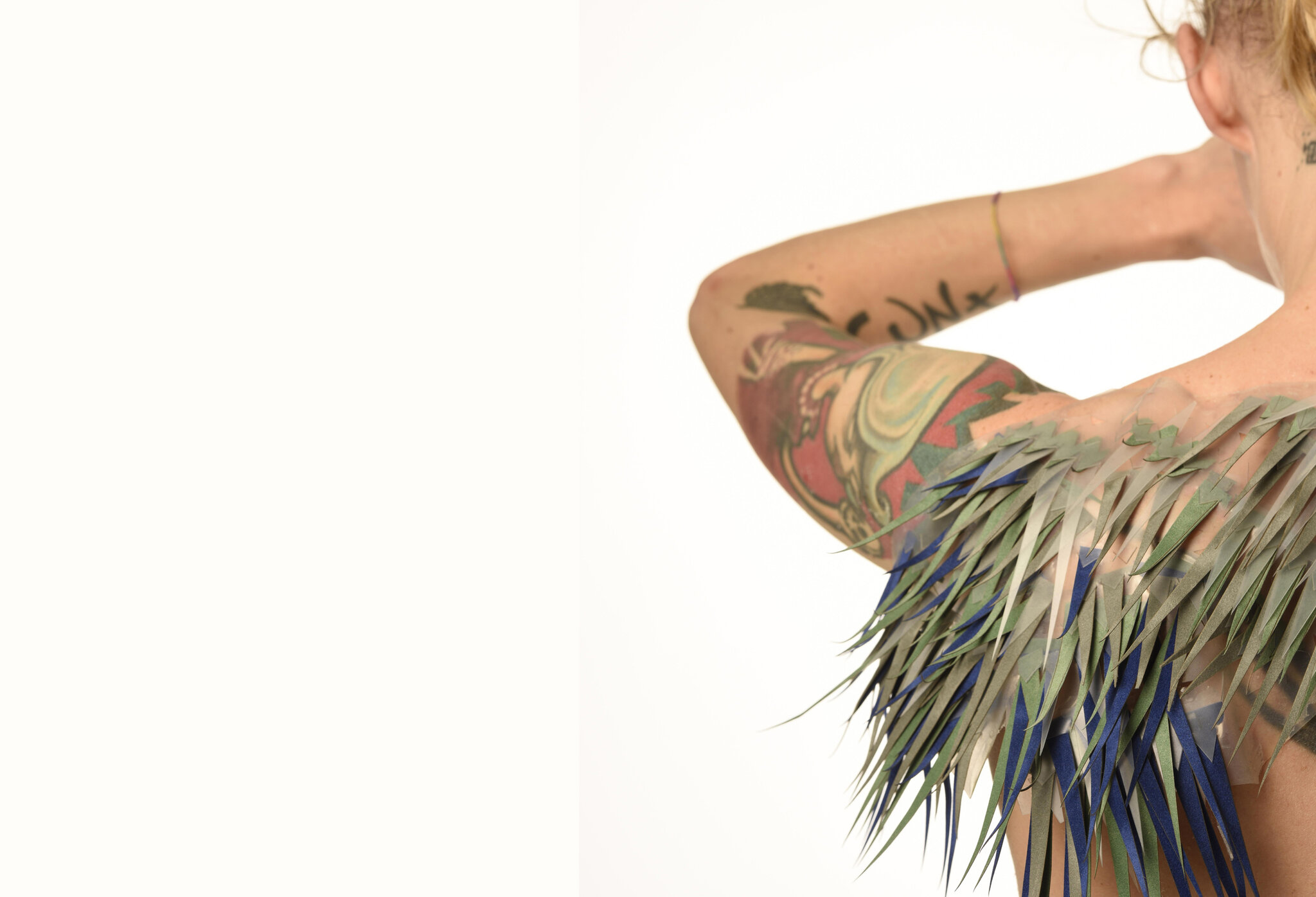 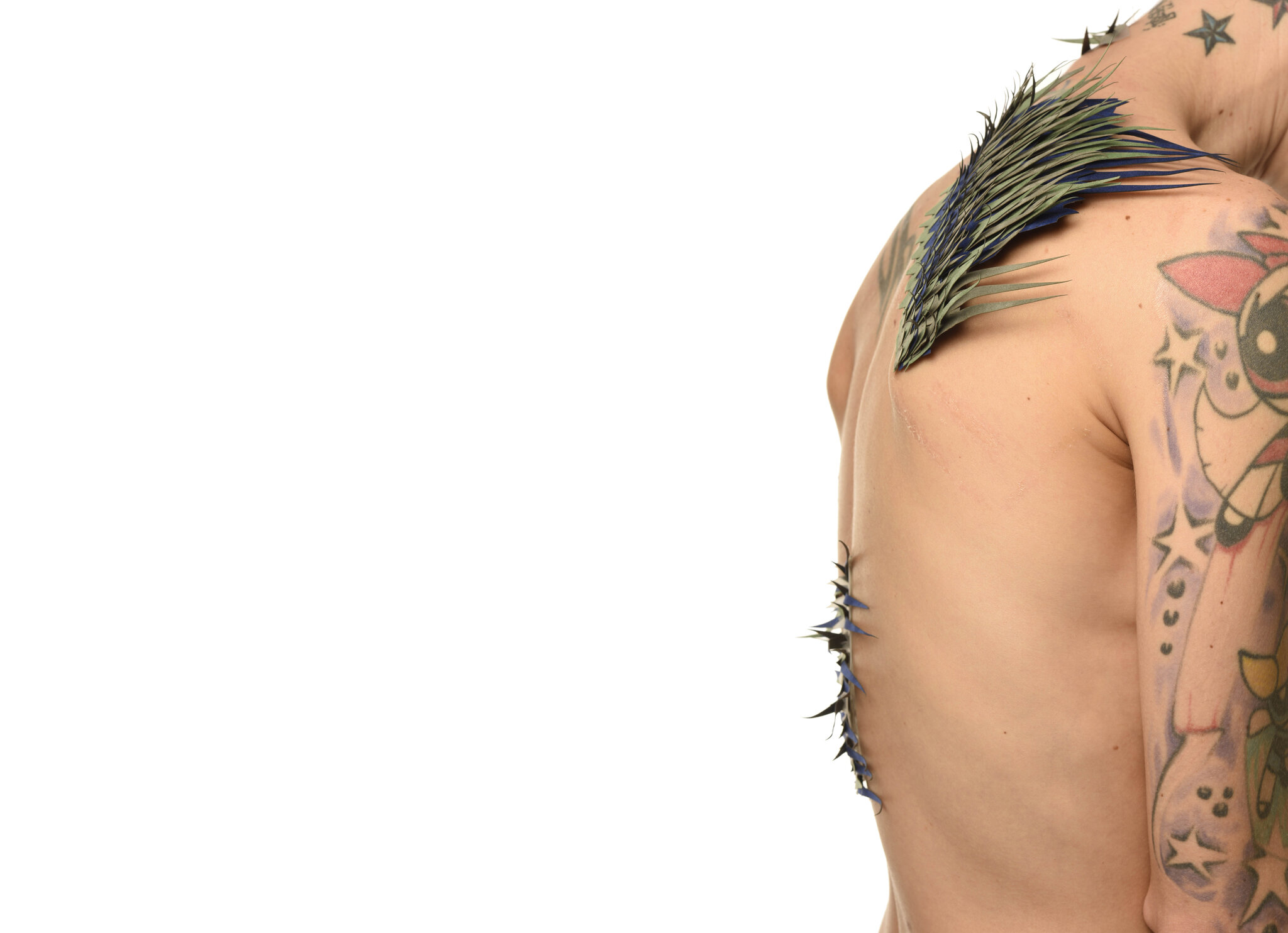