I remember as a child visiting my grandparents near the desert in Arizona and trying to pick up a fruit fallen from a cactus. The locals call it a prickly pear. Being unaware, I was stuck by many of the tiny invisible needles that cover the fruit. Another time I walked too close to what my grandmother called a Jumping Cactus and got a seat full of needles, special barbed needles designed to attach onto anything at the slightest touch and detach from the rest of the body, sometimes giving its victim a later surprise. These are just two of the many peculiar ways a cactus protects itself. Buffering is an exploration into the protective structure of a common cactus, the Barrel Cactus.

The Barrel Cactus has a round shape covered in many vertical rows of needles sitting upon orderly constructed ridges. The ridges serve two functions, first to keep the needles further out from its core where water is stored and second to expand and contract allowing more water to be stored. Because the needles reach out and overlap each other across the peaks of these ridges a small barrier of air is created around the cactus. Similar to a bubble that helps keep the cactus cool during the day, warm at night and helps slow down wind in order to prevent water evaporation from the surface.

The goal of this project was to try and recreate this kind of bubble or in between space that is created by the extension of an overlapping network of pieces or simply ridges and needles. The structure of the needles on the cactus appears chaotic but if you look closely it’s very regular, organized and symmetric. The needles come out in groups from areoles that are evenly spaced upon the ridges. Other manmade tools with similar construction were also used as sources of inspiration. One example is a defense tool that has been used in wars and barriers called the Czech Hedgehog, three metal pieces bound together and jutting out in all different directions. Distributed in multiples they create an anarchic looking line but an effective barrier for blocking big structures from coming through. The line can be constructed in an orderly fashion and just like the cactus the spikes come out of a central point. Expanding further with another similar form is the Tetrapod; a concrete structure used to stop coastline erosion, an almost identical form is used but poured from concrete and ‘stacked’ along the shoreline to break waves. The shapes of these man made barriers are finite and predetermined but in their multitude, yield a frenzied and infinitely adaptable form.

The movements created by the structure of knitting in the designs here allow a more flexible coverage, like the ridges of the cactus body. These textiles could be worn on the body. The pieces create a strong but adaptable overlapping boundary between the outside world and our bodies. The sense of protection remains not just in a physical realm of the wearer but also the mental. The needles remain in constant states of transformation via movement, abstracting the form of the body. The body’s true form is concealed and complicated by the overlapping Plexiglas. In this example the body is given a new form or an extension to our existing bodies. In the 1970s, artist Rebecca Horn made performances experimenting with how our bodies engage with the space surrounding us using body-extensions like extra long fingers so that one could feel both sides of a large room at once or a mask made of pencils used to draw on the wall, tracing the movement of the head. Protection and concealment remain key in these designs, what came out is also something that wants to reach out to its surroundings. As if the needles become feelers looking for new sensations, reconfiguring how we perceive the world around us. 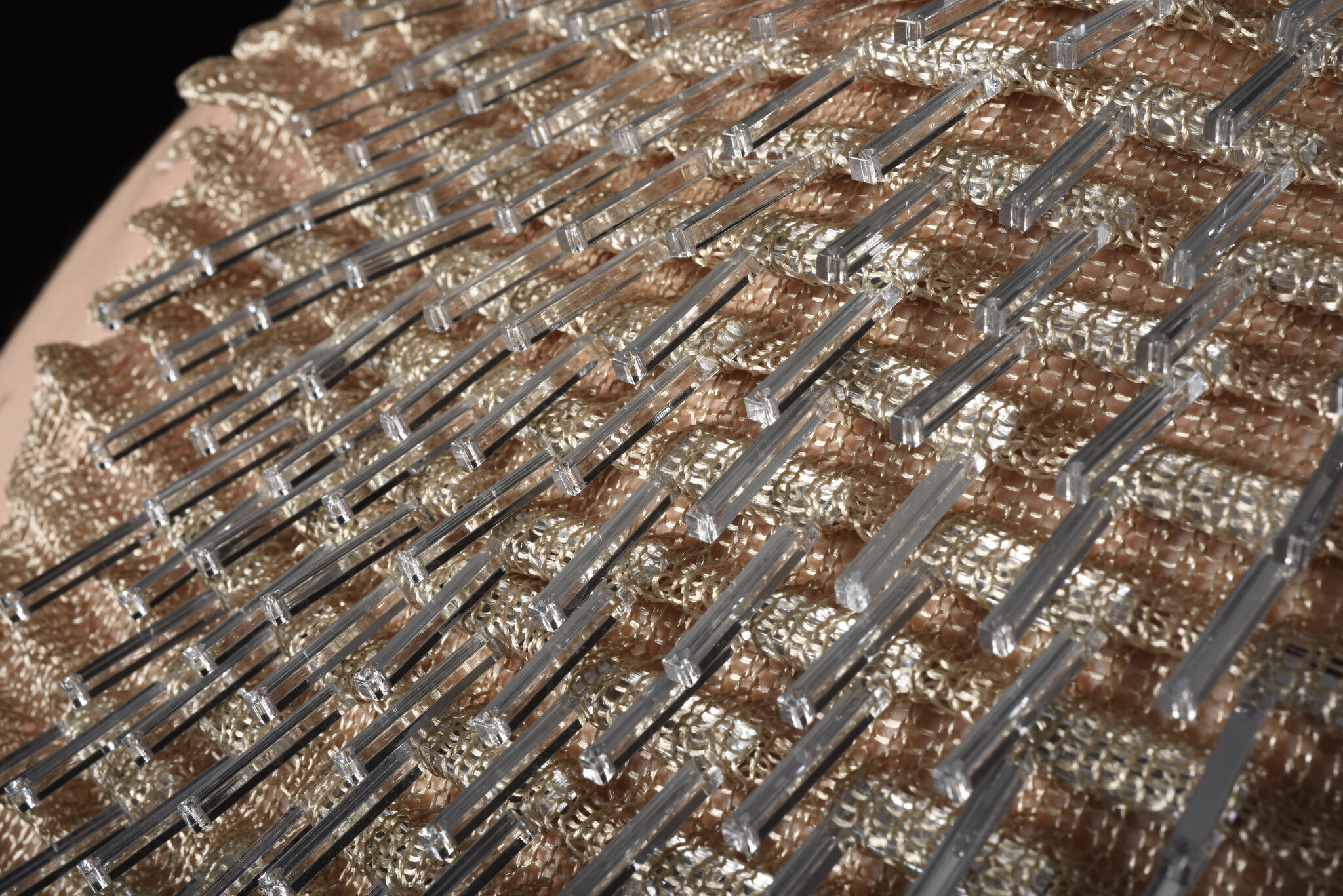 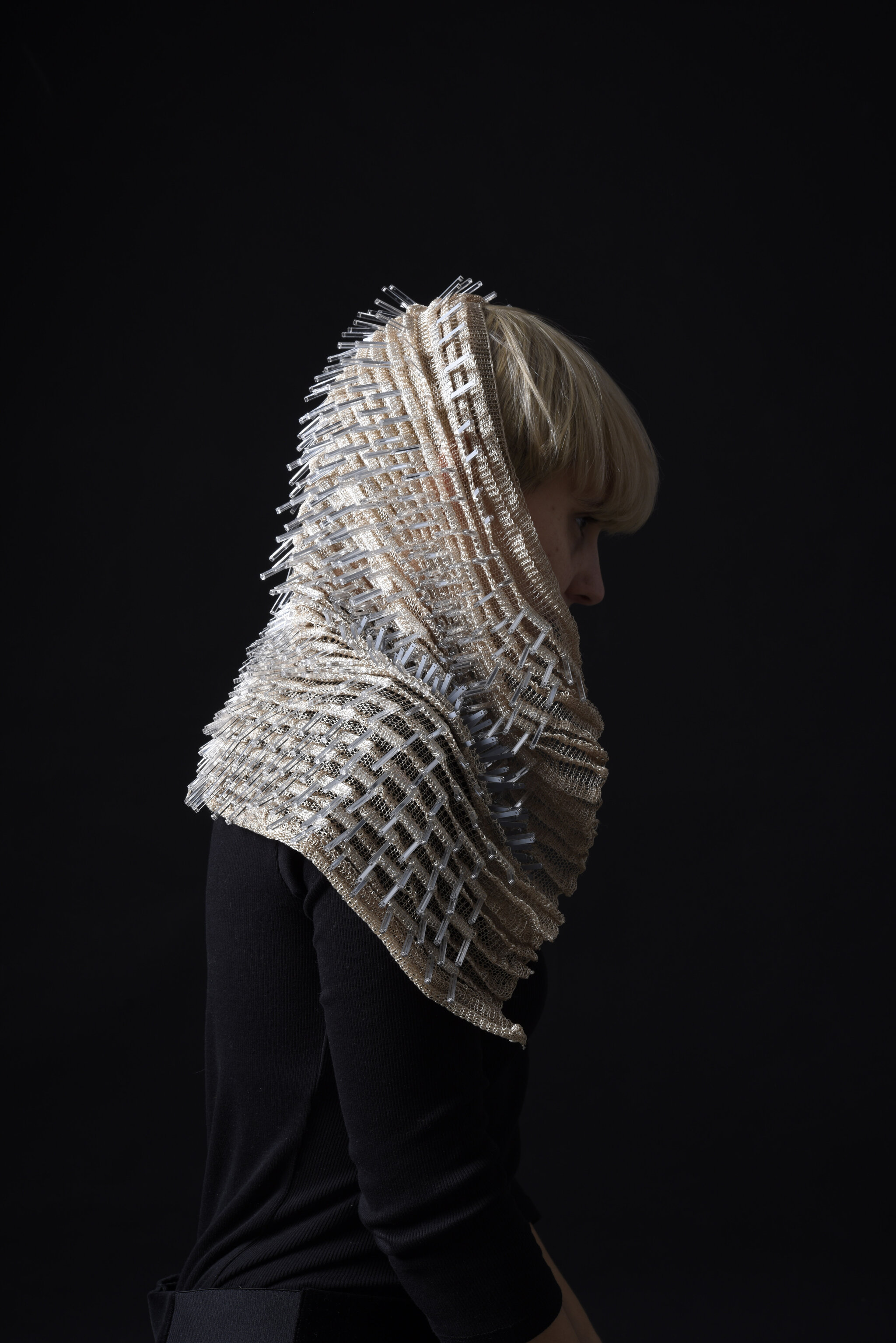 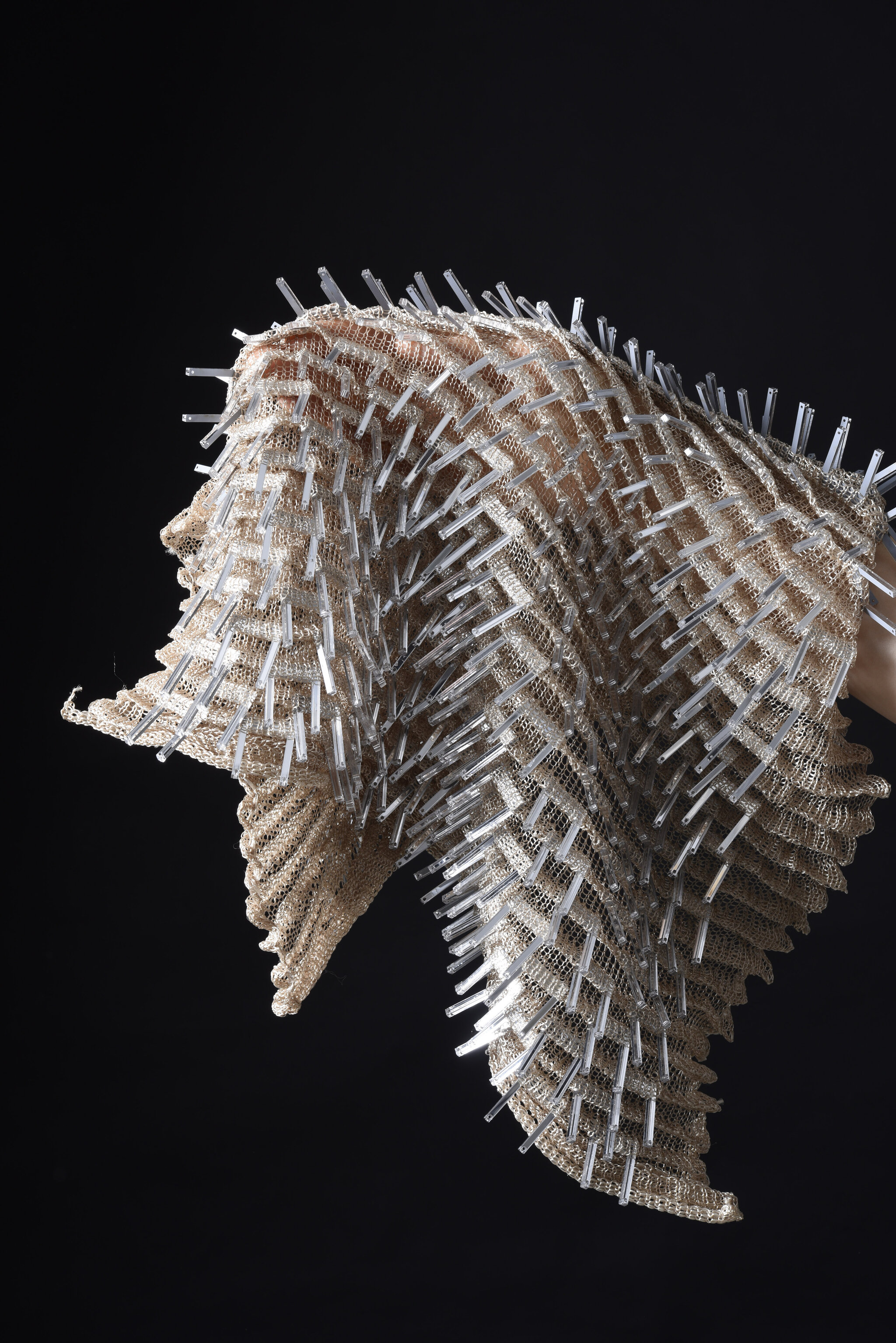 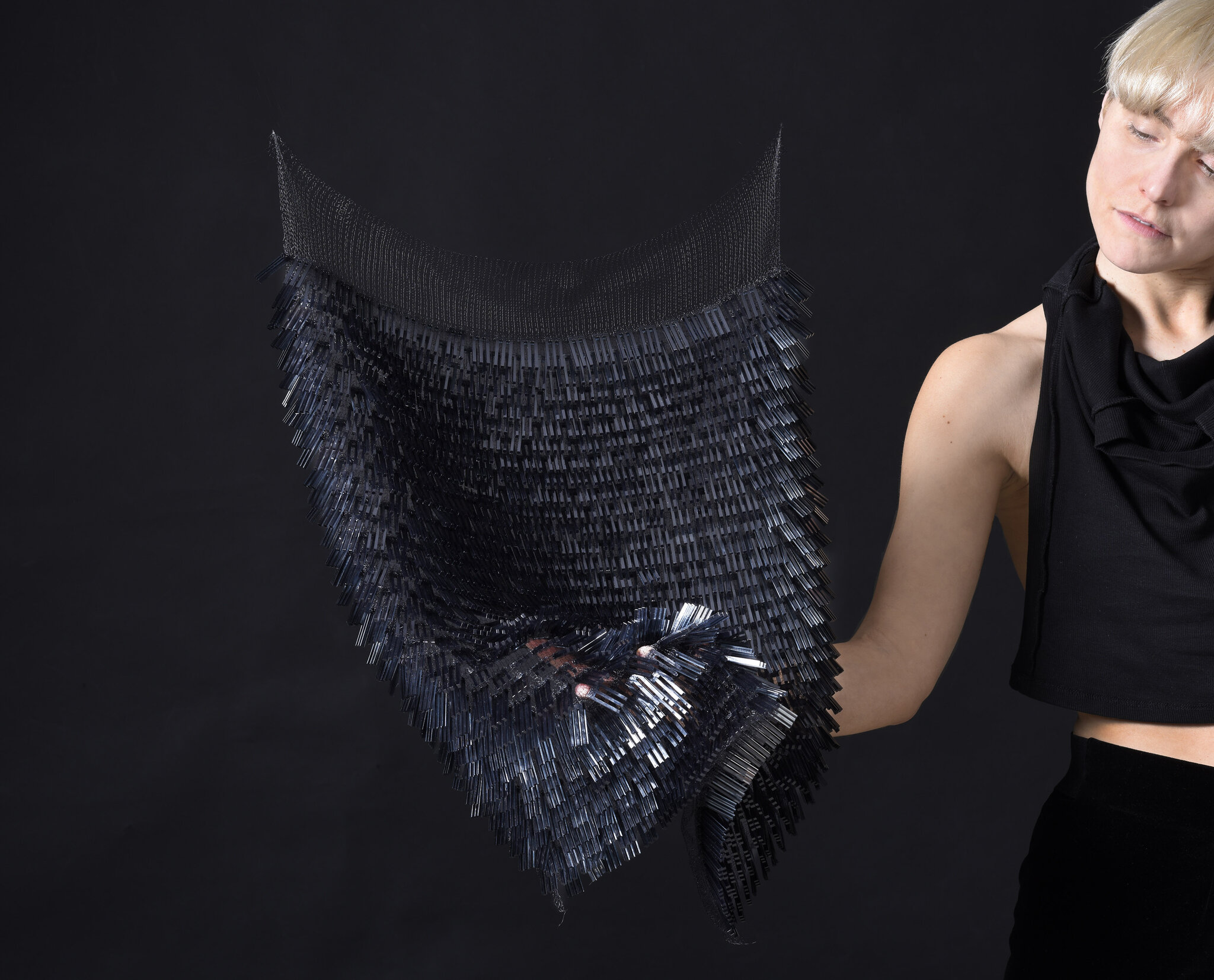 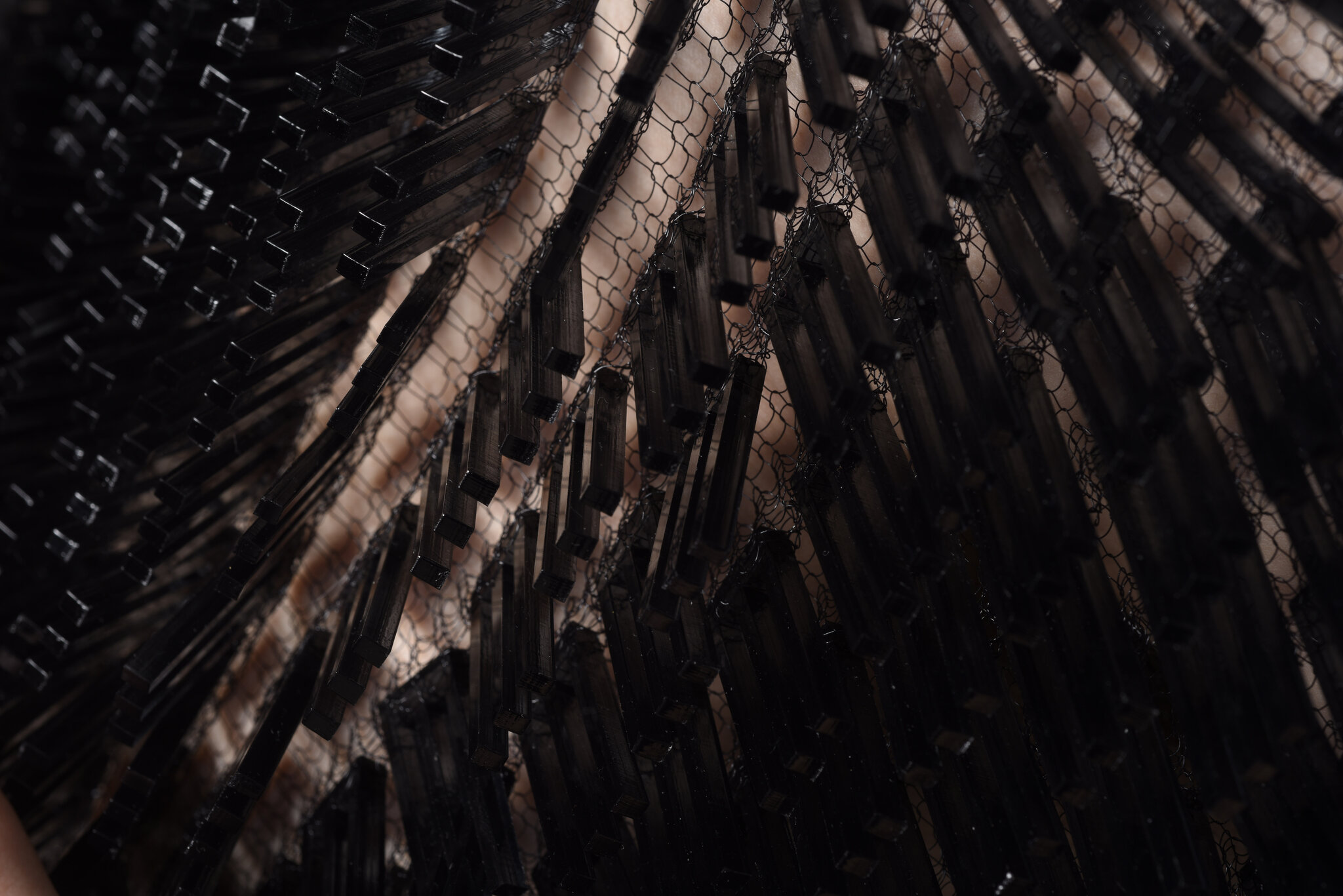 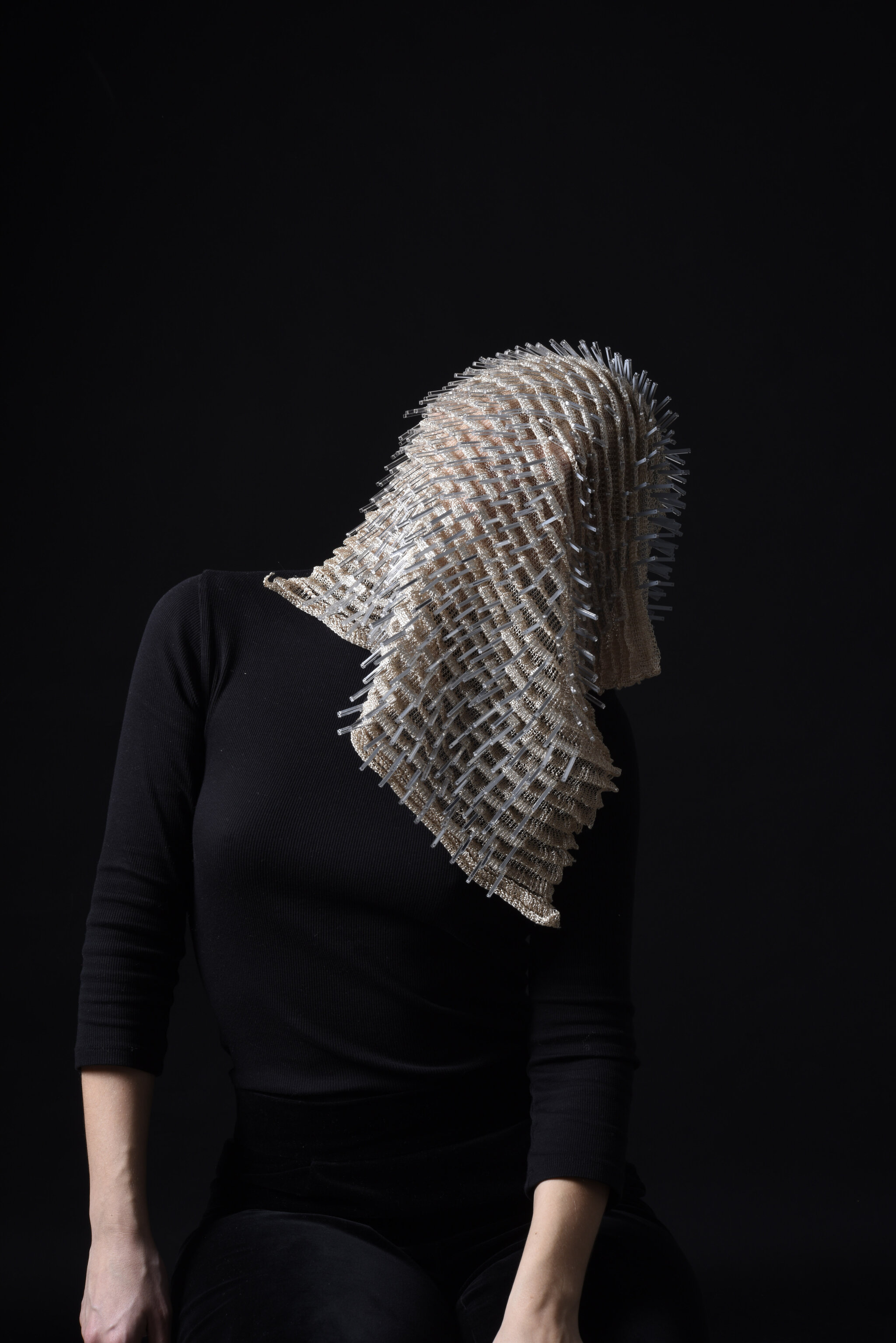